The Oxford Hospitals Charity (formerly the Oxford Radcliffe Hospitals Charitable Funds) needed support in a number of areas: having undertaken a review of their major gift fundraising they wanted to create a new major giving strategy for the charity going forward with a clear implementation plan; they needed help with bid writing and they had been unable to recruit a maternity cover for their Head of Major Gifts and Grants role.

We provided a maternity cover for the role of Head of Major Gifts and Grants on a two day a week basis. She worked with one of our Directors to produce a new major giving strategy and 5-year implementation programme which was signed off by the Trustee Board.

We have since worked with the team to set up and implement the new programme, including setting up a new prospect management area on the database, building a pipeline, creating new team processes, refining the ask, and arranging major donor meetings for the CEO and Chair of Trustees.

We have also worked closely with the team on a number of trust applications, helping them to secure a six-figure grant for a capital project.

We reviewed the data stored on the CRM system and created a GDPR compliant approach for the future. We wrapped up our work with Oxford Hospitals Charity by delivering hands-on ‘making the ask’ training for the Fundraising Team. 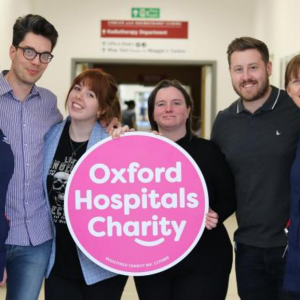